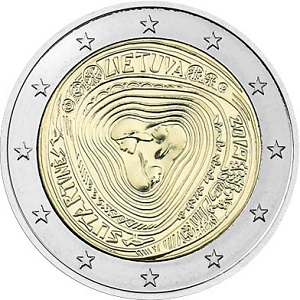 Details relating to the Lithuanian Commemorative of 2019.

This coin is in honour of the traditional Lithuanian multi part songs  - also known as Sutartinės. This art form was raised to the status of  "Intangible Cultural Heritage" by UNESCO in 2010.

Wikipedia tells us that :

"Sutartinės is a syncretic art form based on interlinking polyphonic music, lyrics and movements."

You can watch a Short Video to see what it's all about.

The motif of the coin shows the heads of three singing women in the centre of the coin with their hair spiraling outwards in a clockwise manner to the edge of the inner circle. Also shown are various objects - a Neolithic amber disc (featured in the 2016 coin) and a stylised plant.

With a little imagination one can make out (on the edge of the inner circle at four o'clock) the knight from the coat of arms of Lithuania. He is surrounded by oak leaves and trees.

On the left of the inner circle between seven and nine o'clock we see the inscription "Sutartinės" which is flanked by two birds.

At the top of the inner circle is the name of the issuing country "Lietuva". Near two o'clock the initials (L.P.)of the designer Liudas Parulski appear.

All in all , a very interesting commemorative coin.