Although my site is about Euro Coins, I assume many who are interested in the coins will also have an interest in peripheral issues such as Euro Bank Notes, paper money value, events leading to the introduction of the Euro, countries intending/wanting/waiting to enter the Eurozone etc. and so you have here a page with a few particulars pertaining to Euro Notes.

All of the Euro Bank Notes have different versions of the following themes:

The images are deliberately designed not to represent any actual structures and are thus not country specific. The differences between the various designs are in the type of style. 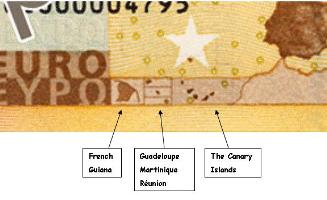 All Euro Notes bear the signature of the president of the European Central Bank.

You can approximately date your note by comparing the signature on it with those in the following table.

Table showing the Presidents of the European Central Bank, their date of tenure and their signatures.

Let's consider the first of these. (Plating Number)

This is a 6 character alpha numeric - a letter followed by 3 numerals followed by a letter and finally a numeral. 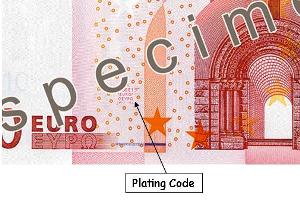 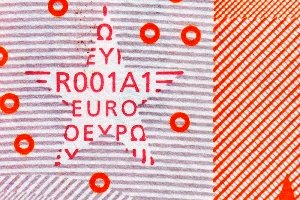 Looking at the image on the left we see that this note (a 10 Euro Note) was printed at location R, that it was printed with the very first plate and that it was at the top left hand corner of the plate - A1 = Row1/Column 1

Each Euro Note has a unique serial number. This is a twelve character alphanumeric with a leading letter followed by 11 numerals.

The leading letter shows for which central bank the note was issued. (National identification Code).

Note:  a bank note issued by a specific National Bank could well have been printed in another country.

From the above table you will see that some countries - France and Germany use two different printers while other countries - e.g. Luxembourg and Malta - do not print any notes.

The design of the Euro Notes ( as with the Euro Coins) was completed after consultation with organizations representing  visibly impaired as well as totally blind people.

Features have been incorporated to enable these people to distinguish between the different notes:

The measures taken to thwart the efforts of counterfeiters are legion - at least 30 have been made known by the authorities or discovered by individuals but there are still others the nature of which is kept secret.

To look at these more closely falls outside of the scope of this site but here is a link to an excellent article in Wikipedia which covers the measures against counterfeiting in greater detail and from which I in fact got much of the material for this page.