Luxembourg was one of the founding members of the Euro zone and started issuing coins in 2002. Some basic facts relating to Luxembourg.

Luxembourg Euro Coins are unique in that every coin bears the effigy of the reigning Grand Duke and the Commemoratives constitute an historical record of the reigning family.

Although the Normal Currency Coins are not too exciting(having as the sole motif an effigy of Grand Duke Henri), Luxembourg has at least supplied us with a delightful set of Commemorative Two Euro Coins having issued every year since the commencement in 2004. The only country apart from Finnland to have done so.

A peculiarity of Luxembourg law is that by law all coins have to display an effigy of the reigning monarch - hence not only on the standard coins but also on the Two Euro Commemoratives Grand Duke Henri is depicted.

As stated above there is but one motif for all 8 coins; there are however, two slightly different portrayals of the Duke, one for the 1,2 and 5 cent coins and another for the remaining coins.

The name of Luxembourg in the local language also appears - "Letzebuerg".

As with the Netherlands, the12 stars representing Europe in the 1 Euro and 2 Euro coins are arranged in the form of a semi circle. This is against the latest guidelines which require the 12 stars to be as in the European flag - i.e. in the form of a complete circle. Presumably at some time in the future the design of these two coins will be altered to reflect the new guidelines. 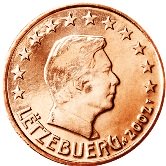 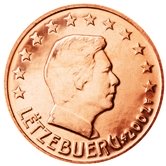 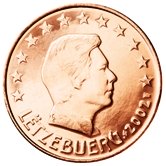 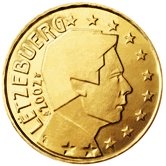 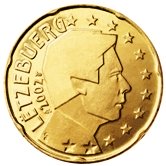 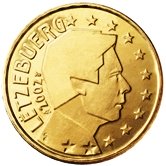 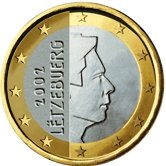 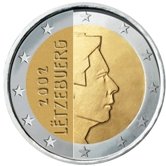 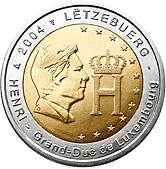 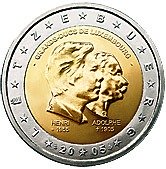 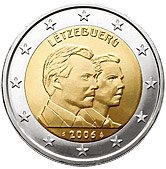 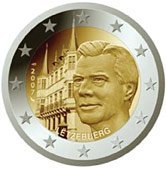 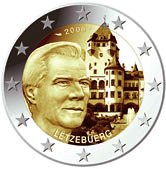 2008 - Berg Castle -shown on the right with the Grand Duke on the left.

2009 - 90th anniversary of the Grand Duchess Charlotte's accession to the throne. 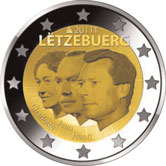 2011 - 50th anniversary of the appointment of Jean as Grand Duke of Luxembourg.On the coin from left to right Charlotte,Jean and Henri. 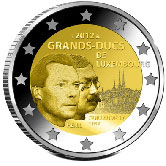 2012 - 100th anniversary of the death of William IV, Grand Duke of Luxembourg. 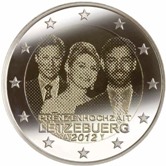 2012 -  The wedding of the Heir Grand-Duke Guillaume with the Countess Stéphanie de Lannoy. 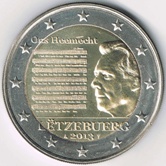 2013 -  National Anthem of the Grand Duchy of Luxembourg. 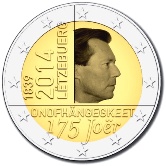 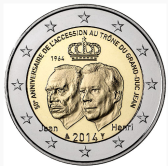 2014 -  50th Anniversary of the Accession to the Throne of Grand Duke Jean. 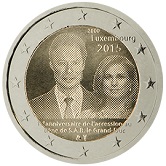 2015 -  15th Anniversary of the Accession to the Throne of Grand Duke Henri. 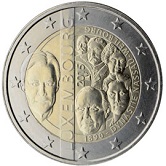 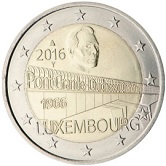 2016 -  50th Anniversary of the building of the Grand Duchess Charlotte Bridge. 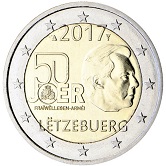 2017 -  50th Anniversary of the Creation of the Luxembourg Volunteer Army. 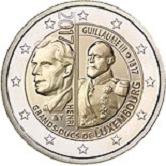 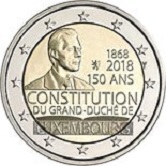 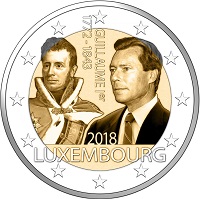 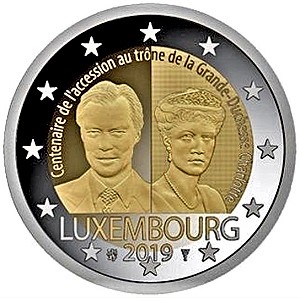 2019 -This coin commemorates the 100th anniversary of the abdication of Maria-Adelheid. 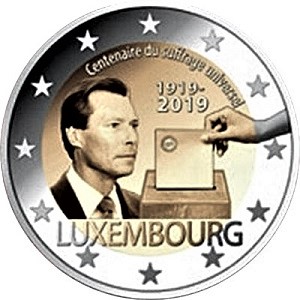 2019 -This coin commemorates the 100th anniversary of Universal Suffrage in Luxembourg. 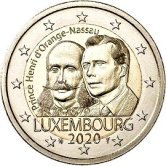 2020-This coin commemorates the 200th anniversary of birthday of Prince Henry of Orange-Nassau. 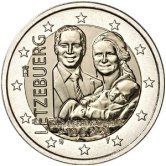 2020-This coin celebrates the birth of  Prince Charles of Luxembourg.

Return from Luxembourg Euro Coins to Links to Specific Countries.