The Netherlands one of the founding members of the Euro zone and started issuing coins in 2002. There are two main series - change of ruling monarch and a particularly interesting Commemorative in 2013.

Some basic facts relating to the Netherlands.

The Netherland Euro Coins have unfortunately only one motif - that of the reigning monarch.

To make matters worse they have issued only one commemorative coin of their own!

The12 stars representing Europe in the 1 Euro and 2 Euro coins are arranged in the form of a semi circle. This is against the latest guidelines which require the 12 stars to be as in the European flag - i.e. in the form of a complete circle. Presumably at some time in the future the design of these two coins will be altered to reflect the new guidelines.

Yes it has been changed in the series with King Willem Alexander.

The Motif for all coins is the same - the head of the reigning monarch Queen Beatrix until 2013 and then King Willem Alexander.

Around the rim of the Two Euro Coin appear the words " GOD ZIJ MET UNS" which is Dutch for "GOD BE WITH US". 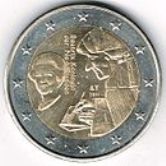 2011 - 500th Anniversary of the publishing of Laus Stultitiae (Praise of Foolishness) by Erasmus of Rotterdam. 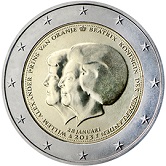 2013 - Commemorating the change of monarchy in the Netherlands - depicted are the heds of Queen Beatrix and the incumbent King Willem-Alexander. 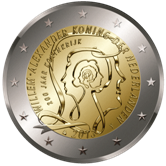 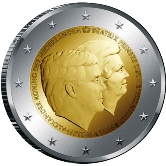 Return from Netherlands Euro Coins to Links to Specific Countries.