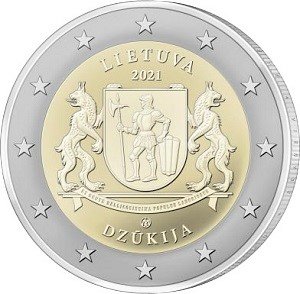 Details relating to the Lithuanian Commemorative of 2021.

This is the third coin in the series devoted to the various ethnographic regions of Lithuania and deals with Dzūkija, which is situated in south east of Lithuania and contains the capital Vilnius as well as the cultural centre Alytus.

A specific dialect of Lithuanian - Dzūk is spoken in this area.

The motif of the coin, which occupies the entire inner circle of the coin shows the coat of arms of Dzūkija.This is based on the seal of  a medieval duke.

In the middle is a knight carrying a halbert and a shield. This is shown on a larger shield which is held by two lynxes. On a band running from one lynx to the other is the inscription in Latin "EX GENTE BELLICOSISSIMA POPULUS LABORIOSUS" (From a most warlike tribe an industrious people). The inscription is rather small and a magnifying glass will be needed by most to read it.

Around the edge of the inner circle running from eleven to one o'clock is the name if the issuing country "LIETUVA" and immediately underneath is the year of issue "2021".

At the bottom, running from seven to five o'clock we see the name of the honoured region "DZŪKIJA".

Finally immediately above "DZŪKIJA" is the mint mark.