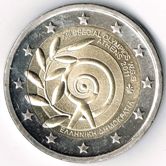 Details relating to the Greek Commemorative of 2011.

The motive shows a shining sun representing the source of life. Also depicted is an athlete from whose arms a spiral emerges that merges into an olive branch. The spiral represents the effort made by the athlete and the olive branch symbolises victory.

In the top right hand side we see the name of the event and at the bottom of the inner ring stands Hellenic Republic in the Hellenic script.