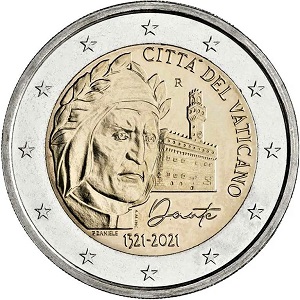 Details relating to the Vatican Commemorative of 2021.

This coin commemorates the 700th anniversary of the death of Dante.

Dante was both a philosopher and poet - indeed one of the most important poets of the middle ages and best known for his poem "The Devine Comody".

Dante was one of the first to publish in the vernacular rather than in Latin. His "devine Comody" is considered by many to be the greatest literary work  in Italian.

The motif of the coin shows a bold laurel-wreathed bust of Dante which occupies the left half of the inner circle.

To the right of Dante's head is an image of the Palazzo Vecchio which serves as Florence's town hall as well as a museum.

Around the edge of the inner circle, runing from twelve o'clock to four o'clock is the name of the issuing country  "CITTÀ DEL VATICANO" (Vatican City). Under CITTA is the mint mark "R".

Under the image of the Palazzo Vecchio we see "Dante" written in cursive script.