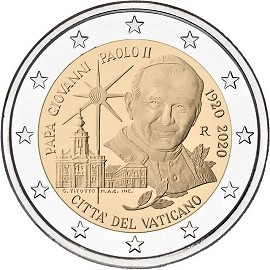 Details relating to the Vatican Commemorative of 2020.

The coin has an interesting and attractive motif.

On the right side of the inner circle is a " head and shoulders" image of John Paul II and underneath his image we see an olive branch which, of course, symbolizes peace.

In the left bottom quadrant is an image of the parish church "Ofiarowania Najświętszej Maryi Panny" in Wadowice, Poland as well as an image of the house in which he was born - now a museum.

In the top left quadrant we see an eight pointed star. This represent the concepts of divinity and truth and also symbolizes the Virgin Mary. Pope John Paul II also dedicated his pontificate to the Virgin Mary.

A little in from three o'clock is the mint mark "R" .

Under the images of the church and house is the inscription in somewhat small print "G.TITOTTO  M.A.C. INC." These are for the coin designer Gabriella Titotto and the engraver Maria Angela Cassol"

All in all a very pleasing coin.