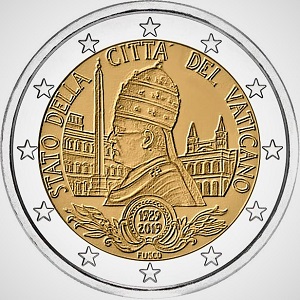 Details relating to the Vatican Commemorative of 2019.

The coin commemorates the 90th anniversary of the founding of the Vatican State.The Vatican is the smallest internationally acknowledged state in the world. The Lateran Treaty, signed in 1929 by Pope Pius XI  representing the Holy See and Benito Mussolini representing the then Kingdom of Italy, recognized the independence of the Vatican.

The motiif of the coin shows an image of Pope Pius XI, with a tiara, looking to  the left. In the background is the Lateral Palace.

Also to be seen is the Lateran Obelisk in the Piazza San Giovanni.The Obelisk was built in Egypt around 1400 BC and later transported to Rome in 357 AD.

Around the edge of the inner circle, running from eight to four o'clock is the inscription "STATO DELLA CITTÀ DEL VATICANO".

Finally at the bottom is the signet  of  the mint master Daniela  Fusco - "FUSCO".