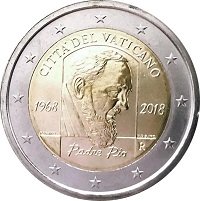 Details relating to the Vatican Commemorative of 2018.

This coin was issued to commemorate the 50th Anniversary of the death of Padre Pio.

Padre Pio, also known as Saint Pio of Pietrelcina, was a friar, priest, stigmatist, and mystic, now venerated as a saint of the Catholic Church. Born Francesco Forgione, he was given the name of Pius (Italian: Pio) when he joined the Order of Friars Minor Capuchin. He was both beatified (1999) and canonized (2002) by Pope Saint John Paul II.

He became the most popular priest in Italy.

The years of Pio’s death and the year of issue (1968 2018) appear in from nine and three o’clock respectively. Finally the name of the designer “P.Daniele” is seen at eight o’clock.