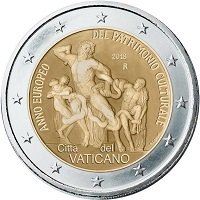 Details relating to the Vatican Commemorative of 2018.

The coin honours the European Year of Cultural Heritage.

To represent European Culture the Statue of Laocoön and His Sons was chosen. This is also known as the Lacoön Group.

The statue was found on the Esquiline in Rome in 1506.  It was then excavated and placed on public display in the Vatican where it can still be viewed. The statue shows the Trojan priest Lacoön who, together with two of his sons is being attacked by sea serpents. The struggle is vividly described by Vergil in the Aeneid. This work of art is said to have been admired by Michelangelo and to have influenced the art of the Italian Renaissance.

The statue is boldly portrayed in the inner circle. Around the edge of the inner circle extending from eight to four o’clock, is the inscription: “ANNO EUROPEO DEL PATRIMONIO CULTURALE” (European Year of Cultural Heritage). At the bottom of the coin is the name of the issuing country ”Città del VATICANO”. In the top right quadrant, somewhat in from one o’clock we see the year of issue and the mint mark – 2018 R.

Finally in small print on the edge of the inner circle ai four o’clock is the name of the designer “D.LONGO”.