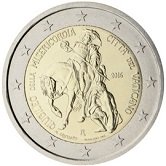 Details relating to the Vatican Commemorative of 2016.

This coin was issued in honour of the “Holy year of Mercy”.

The “Holy year of Mercy” was deemed by the Roman Catholic Church to run from 8th December 2015 to 30th November 2016. Pope Franziskus called it into being on the occasion of the 50th anniversary of the ending of the second Vatican council.

In keeping with the idea of the coin, the Motif chosen was that of St. Martin. St. Martin was a Roman soldier who, while riding his horse, saw a beggar suffering from the cold and took the cape he was wearing and cutting it in half with his sword gave half to the beggar.

Christ is supposed to have come to him in a dream the next night and he later converted and became a Christian. In the inner circle we see St.Matin on his horse and the beggar kneeling on the ground.

Around the edge of the inner circle from seven to twelve o’clock is the inscription “GUIBILEO DELLA MISERICORDIA”( Jubilee of Mercy), and from one to four o’clock is thr name of the issuing country. The year of issue is around three o’clock and the mint mark at six o’clock.

Finally, the name of the designer, ”M.CRISCIOTTI” is between seven and six o’clock.