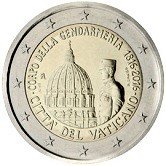 Details relating to the Vatican Commemorative of 2016.

The coin commemorates the 200th anniversary of the Corps of Gendarmerie of the Vatican.

This institution fulfils the functions of security and traffic police within the Vatican. The corps consists of around 150 members and is distinct from the famous Swiss Guard. The former is concerned with public order and the latter is mainly concerned with the personal safety of the pope.

The inner circle shows a member of the guard in front of the dome of St. Peters in Rome. Below the dome is a balustrade With small statues of various religious persons – John the babtist, Jesus and some of the apostles.

Around the top of the inner circle is the name of the corps in Italian “CORPO DELLA GENDARMERIA” as well as the dates 1916-2016.

Around the bottom is the name of the issuing country “CITTA’ DEL VATICANO”.

Next to the dates is the name of the designer – D.LONGO.