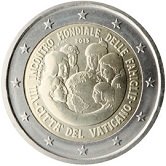 Details relating to the Vatican Commemorative of 2015.

This coin was issued to celebrate the 2015 World Meeting of Families in Philadelphia.

The meeting took place under the motto “Love is our message  - The family fully alive.”

These meetings take place every three years. The aim is that that families from around the world get together to pray, communicate and learn from one another. The tradition was inaugurated by Pope Paul II in 1994. The family is seen as a divine gift.

The motif of the coin shows two families embracing the whole earth, hence showing the “togetherness” of all people. We are all part of one big family.

Running around the edge of the inner circle are two inscriptions – the upper one “VIII INCONTRO MONDIALE DELLE FASMIGLIE”; and the bottom one “CITTA’ DEL VATICANO”.

The year of issue appears at the top and the mint sign a little in from three o’clock.