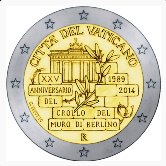 Details relating to the Vatican Commemorative of 2013.

This coin commemorates the 25th anniversary of the fall of the Berlin Wall.

The Vatican is the only EU member to have issued a commemorative coin celebrating the fall of the Berlin Wall. In 2015 Germany and San Marino issued commemoratives celebrating German reunification but that is in fact another matter.

The motif is interesting. In the background is the famous Brandenburger Tor – a symbol of German unity and freedom. There is a partial depiction of a wall constructed with bricks and a few strands of barbed wire – symbolic of a lack of freedom and finally growing through the wall an olive branch representing peace.

Reading the entries in the bricks, running from the left down to the bottom, we have:

The two entries in the bricks on the right contain the year commemorated and the year of issue -1989 and 2014.

The mint mark is at six o’clock. At eight o’clock is the name of the designer “G.TITOTTO” and slightly in the there the mark of the engraver “C.M.Inc.”