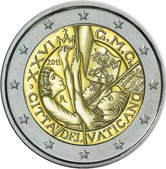 Details relating to the Vatican Commemorative of 2011.

This coin honours the 26th World Youth Day of 2011 in Madrid.

The motto of this World Youth Day was “Planted and built up in Jesus Christ, firm in the faith” which is a biblical quote. (Col 2:7).

The motif in the inner circle shows three young people each holding something in their hands. Left a crown mounted by  a cross, in the middle the flag of the Vatican and right the flag of Spain.

Around the lower edge of the inner circle is the name of the issuing country “CITTA’ DEL VATICANO” and around the upper half we see “XXVI G.M.G.” standing for 26th Giornata Mondiale della Gioventù. The name of the designer “O.ROSSI”  is between six and seven o’clock. The initials of the engraver ”M.C.C.” are seen at two o’clock - rather small, the year of issue at ten o’clock and the mint mark at eight o’clock.