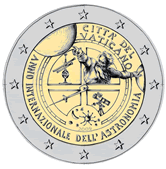 Details relating to the Vatican Commemorative of 2009.

The coin has been issued in honour of UNESCO’s declaration of 2009 as the “Year of Astronomy”.

400 years previously, in 1609, Galileo used a telescope for the first time for astronomical observations.

This is a very interesting coin. In the inner circle we see an Astrolabium divided into four quadrants. In the upper right quadrant the creation of the sun and the moon is shown. This is from Michelangelo’s fresco in the Sistine Chapel. In the upper left quadrant is Galileo’s telescope and diagonally opposite, in the bottom left quadrant is a modern reflecting telescope.

At the bottom is the year of issue 2009 and immediately above that small images representing sun, moon and stars.

The initials of the engraver “MCC”, are seen at seven o’clock and the name of the designer “O ROSSI” are at five o’clock.

Around the edge of the inner circle stands “ANNO INTERNAZIONALE DELL’ ASTRONOMIA” (International Year of Astronomy). From twelve to two o’clock is the name of the issuing country – CITTA’ DEL VATICANO.