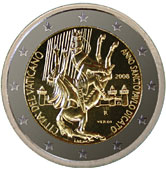 Details relating to the Vatican Commemorative of 2008.

The coin commemorates the 2,000th birthday of the apostle St.Paul.

St. Paul was supposedly born in AD 8 and after his conversion on the road to Damascus became one of the first Christian Theologians and a successful Christian missionary.

The coin shows the incident that lead to St.Paul’s conversion. A light from the sky dazzles him and he falls from his horse having a vision of the resurrection of Christ. In the background the walls of Damascus can be seen.

This year is know as “ANNO SANCTO PAVLO DICATO” and is celebrated by the Catholic church. This inscription is seen on the edge of the inner ring at from two to five o’clock. Note – the V in PAVLO is the way a U used to be written and so one should actually read PAVLO as PAULO.

On the left side the name of the issuing state appears “CITTA’DEL VATICANO”. The year of issue 2008 is around three o’clock. The mint mark R and the name of the designer VEROI appear between four and five o’clock. At the bottom are the initials of the engraver I.D.S. INC.