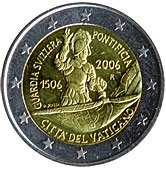 Details relating to the Vatican Commemorative of 2006.

The coin celebrates the 500th anniversary of the founding of the Swiss Guard.

The Swiss Guard was founded in 1506 when 150 Swiss mercenaries commenced their duty in the Vatican. Their job was to protect the person of the Pope. They constitute a sort of ”in house” police force.

Even to-day the 110 members of the guard are all Swiss and all catholic.

The inner circle,which is very eye catching, shows a member of the guard taking his oath of allegiance on the flag on joining the guard. Around the edge of the inner circle but slightly inset is the inscription “GUARDIA SVIZZERA PONTIFICA” .This runs from eight to two o’clock.

At the bottom is the name of the issuing country – CITTA’DEL VATICANO. The two dates 1506 and 2006, the founding of the guard and the year of issue are shown vertically offset at nine and three o’clock. The mint mark R is under 2006 and the name of the designer O.ROSSI lies along trhe top of the flag (eight o’clock). Finally the mark of the engraver, MCC Inc., is seen next to the guard’s left hand .

All in all, a very appealing coin.