Details relating to the Vatican Commemorative of 2005. 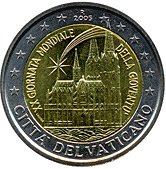 This coin celebrates the “20th World Youth Day 2005” held in Cologne at the invitation of the Pope.

With the above connection it was appropriate to choose the Cologne Cathedral as the motif for the coin. It is depicted in the inner circle. The comet I believe represents the star of Bethlehem, followed by the wise men.

Around the edge of the inner circle is the inscription ”XX GIORNATA MONDIALE DELLA GIOVENTU’”.

The designer “LONGO” is seen at around eight o’clock. The mint mark and year of issue are seen at the very top of the outer ring. The name of the issuing country is shown with the bold inscription “CITTA’DEL VATICANO” at the bottom of the outer circle.