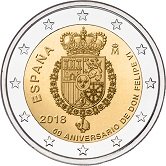 Details relating to the Spanish Commemorative of 2018.

The coin commemorates the 50th anniversary of birth of King Felipe VI.

Around the edge of the inner circle we have two inscriptions:

Between nine and ten o’clock the name of the issuing country "ESPAÑA".

The mint mark is next to the crown between one and two o’clock and the year of issue 2018 is at eight o’clock.

Return from the Spanish Commemorative of 2018 to euro coin collector.