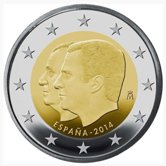 Details relating to the Spanish Commemorative of 2014.

This coin celebrates the change of monarchy.

The full title of the current king is :

The motif for the coin is simply a double portrait of the two kings – Juan Carlos in the background and Felipe in the foreground.

At the bottom of the inner circle is the inscription:” ESPAÑ- 2014”.

The mint mark is at three o’clock.

Return from the Spanish Commemorative of 2014 to euro coin collector.