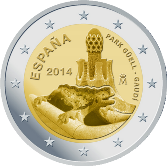 Details relating to the Spanish Commemorative of 2014.

This coin is the fifth in Spain’s UNESCO World Heritage Series.

The subject chosen is the Park Güell in Barcelona. The park covers over 17 hectares and was built in the period 1900 to 1914. The park contains many delightful stone structures as well as Ceramic creations.

In the inner circle in the foreground is the lizard sculpture of Antoni Gaudi which is also the emblem of the park. In the background is part of one of the pavilions situated at the entrance to the park.

Around the edge of the inner circle is the name of the issuing country “ESPAÑA” and “PARK GÜELL – GAUDÍ”. The year of issue 2014 is next to s ESPAÑA and the mint mark stands at three o’clock.

Return from the Spanish Commemorative of 2014 to euro coin collector.