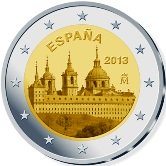 Details relating to the Spanish Commemorative of 2013.

This is the fourth commemorative coin issued by Spain in its UNESCO World Heritage series and features the San Lorenzo Monastery in Madrid.

It is a palace/monastery complex constructed from 1563 to 1584 at the behest of the Spanish king Philipp II.

The image in the inner circle shows the southern façade of the complex. With the two bell towers and the church cupolas. The name of the issuing country ESPAÑA is shown at the top of the inner circle the year of issue 2013 at two o’clock and the mint mark at three o’clock.

Return from the Spanish Commemorative of 2013 to euro coin collector.