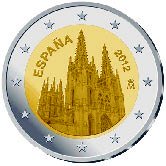 Details relating to the Spanish Commemorative of 2012.

This is the third coin in the Spanish series of UNESCO world heritage sites.

The motif chosen for this coin is the Cathedral at Burgos. The cathedral is one of the most impressive examples of Gothic architecture in Spain. Itl was built over a very long period (1221-1567), with of course, lengthy interruptions. In 1835 the legendary Spanish hero El Cid was interred in the cathedral.

Return from the Spanish Commemorative of 2012 to euro coin collector.