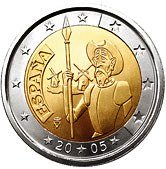 Details relating to the Spanish Commemorative of 2005.

The coin commemorates the 400th anniversary of the publishing of Cervantes famous novel “Don Quixote”, regarded by some as the greatest novel ever written. Be that as it may, it is most certainly well worth a read. I envy those who can read it in the original Spanish.

Don Quixote is depicted in the inner circle. Also shown are some of the windmills the valiant knight charged. This was one of the first and perhaps the best known of the many adventures of Don Quixote. Personally I think his squire Sancho Panza also deserved a place on the coin.

You will see that some of the stars in the outer ring (one o’clock to four o’clock) are in a raised arc.

This practice also appeared in some of the earlier Spanish two euro coins but it was decided that the twelve stars of the EU should be shown as on the European flag and the raised arc no longer appears on Spanish coins.

On the left of the inner circle is the name of the issuing country “ESPANA” and at seven o’clock the mint mark.

In the outer ring the year of issue 2005 appears. This no longer happens for the same reason that the raised arc no longer appears.

Return from the Spanish Commemorative of 2005 to euro coin collector. 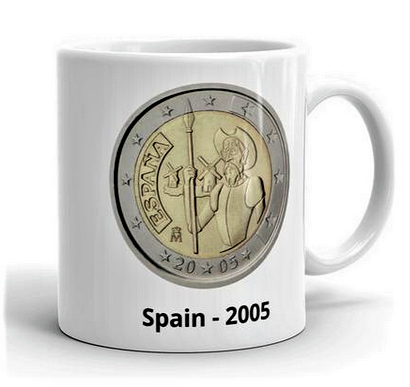