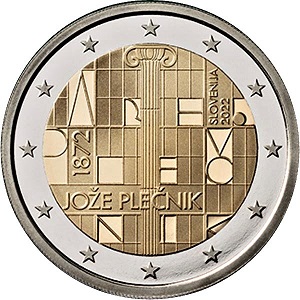 Details relating to the Slovenian Commemorative of 2022.

This coin commemorates the 150th anniversary of the birth of architect Jože Plečnik.

The motif of the coin is rather involved - a part of grand window of the National and University library’s reading room is seen together with a pillar in front of it.

The involved/clever part of the design is the inclusion of the architect's initials and surname into the window "A R H. P L E Č N I K".

A,R and H run horizontally across the coin from ten o'clock to two o'clock.

Next ( again running horizontally across the coin) from nine o'clöock to three o'clock re the letters P, L, E and Č. The latter is seen to the right and looks like a V over a C.

Finally near the bottom, running from between seven and eight o'clock to between four and five o'clock are the letters N, I and K. A bit of imagination is required to make out the K.

Between the second and third rowsof letters an inscription the with architect's name "JOŽE PLEČNIK" can be seen.

Finally the issuing country and the year of issue "SLOVENIJA 2022" are shown the upper right quadrant, running vertically.