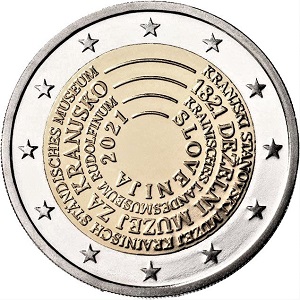 Details relating to the Slovenian Commemorative of 2021.

This coin commemorates the 200th Anniversary of the founding of the Carniolan State Museum.

Since Slovenias independence in 1991 the museum has been known as the National Museum of Slovenia.

The rather unusual motif  shows four concentric circular arcs running from eleven to one o'clock, the outermost on the edge of the coin's inner circle, the other three falling consecutively thereunder.

The arcs are supplemented with the historical names for the museum ( in Slovenian and German) as well as the name of the issuing country and the year of issue.

The next inscription reads "MUSEUM RUDOLFINUM".

And finally the innermost inscription with the name of the issuing country and the year of issue reads "SLOVENIJA 2021".

The coin was minted in the Slovakian mint Mincovňa Kremnica in Kremnica but bears no mint mark.