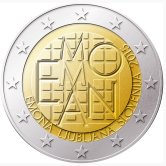 Details relating to the Slovenian Commemorative of 2015.

The coin commemorates the 2.000th anniversary of the founding of the Roman town of Emona.

It was built in the middle of the current Slovenian capital of Ljubljana.

Within the inner ring the letters EMONA appear, clearly representing the city. A second M appears under the first M – a clever device to represent 2.000 as a double MM in Roman Numerals stood for 2000.

Emona was built in a rectangular fashion and this is shown in the outline of the town as repsented in the coin. In a ring around the inner circle the names of the Roman town, the present city, the issuing country as well as the year of minting are shown – EMONA LJUBLJANA SLOVENIA 2015.

The coin shows no mint mark.