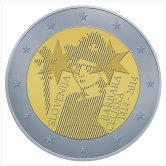 Details relating to the Slovenian Commemorative of 2014.

This coin commemorates the crowning of Barbara von Cilli in November 1414 as the last Emperess of the Holy Roman Empire. The coronation took place in Aachen. The empress was active in politics and also took an interest in occult matters and in alchemie.

The image in the inner circle is stylised representation of Barbara von Cilli with her scepter. Also shown are three six pointed stars which were typical for the noble family to which she belonged.

The design was the winner in a public competition.