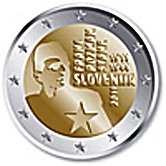 Details relating to the Slovenian Commemorative of 2011.

Rozman was born in 1911 near Ljubljana. He was an underground fighter for the communist party.

Immediately after the occupation of Yugoslavia in 1941 he organized and trained the first partisan units. His unit consisting of around 300 men was one of the most effective in the country-

The motif is a stylized portrayal of Rozman. At the bottom of the inner circle is a large five pointed star – this represents Rozman’s membership of the communist partisan organization.