Details relating to the Slovakian Commemorative of 2021. 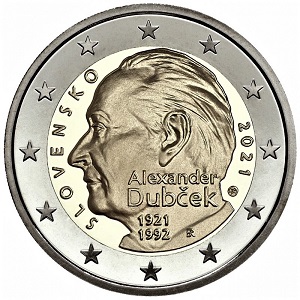 Dubček was general secretary of the Czechoslovakian communists (Czechoslovakia seperated into the two independant republics of Slovakia and the Czech Repiblic in 1993) and was a leading figure in the Prague Spring of 1968.

The motif of the coin is a left facing profile of Dubček that fills the inner circle of the coin.

In the lower half of the coin is the name of the man the coin is dedicated to "Alexander Dubček".

Finally again on the edge of the inner circle we see at four and five o'clock respectively the mint mark and the initials  "BR" of the coin's designer.