Details relating to the San Marino Commemorative of 2019. 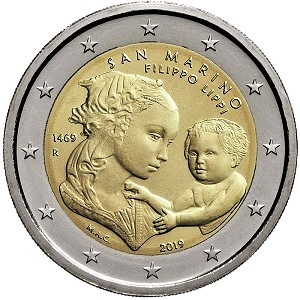 Filippo Lippi (1406-1469) was an Italian painter of the early Renaissance.

Lippi was a monk for years and got to know the Dominican novice Lucrezia Buti.  He got permission for her to pose for him for a painting of the Virgin Mary. She became his mistress and bore him a son and later a daughter.

The coin's motif shows a detail of his 1465 painting Madonna and Child with two Angels.

Around the edge of the inner circle,from eleven to two o'clock is the name of the issuing country "San Marino"and thereunder "Filippo  Lippi"

At nine o'clock is the year of death 1469 and just beneath it the mint mark "R".

At eight o'clock are the initials "M.A.C." of the coin designer Maria Angela Cassol and finally  between six and five o'clock we see the year of issue "2019".