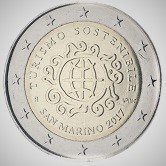 Details relating to the San Marino Commemorative of 2017.

This coin was issued to honour the nomination of 2017 by the United Nations General Assembly as the International Year of Sustainable Tourism for Development.

The concept of sustainable tourism is that of a tourism that is non-intrusive, that does not damage the environment, that respects the planet and that does not negatively affect the local population in any way.

The motif shows the earth surrounded by waves.

Around the edge of the inner circle, from nine to three o’clock is the inscription “TURISMO SOSTENIBILE” and from eight to four o’clock the issuing country and year of issue “SAN MARINO 2017”.

Near eight o’clock is the mint mark ”R” and near four o’clock the initials of the engraver UP INC”.

Finally, somewhat difficult to discern, there is a small circle on the surface of the earth between two waves in from two o’clock. Within the circle, only discernible with a magnifying glass is a small “A”. This is the mark of the designer Andrew Lewis.