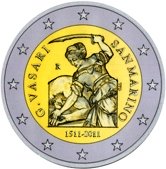 Details relating to the San Marino Commemorative of 2011.

This coin commemorates the 500th anniversary of the birth of the Italian Painter, Architect and Historian Giorgio Vasari.

The somewhat gruesome motif is a part of his painting “Judith decapitates Holofernes”. This is from the book Judith in the old testament.

Now here is something interesting and previously unknown to me – there are three versions of the old testament Hebrew (Jewish), Protestant and Roman Catholic and the book Judith is only in the Catholic version – one learns a lot through coins!! Follow the links if you wish to become wiser!!