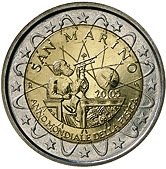 Details relating to the San Marino Commemorative of 2005.

This coin celebrates the UN “international year of physics”.

2005 was chosen as the international year of physics as it marked the 100th anniversary of the publication of Einstein’s “Special Theory of Relativity”.

In the inner circle the famous Italian scientist Galileo Galilei is shown with the telescope with which he made several important astronomical discoveries. Also shown is a globe, representing perhaps a planet, and thereunder the year of issue 2005.

An interesting feature of the coin is the outer ring where the twelve stars of the EU are separated by arcs representing the paths(orbits) of electrons around the atom represented by the inner circle.

This would no longer be allowed as the twelve stars, representing the unity of the EU, may not be separated. 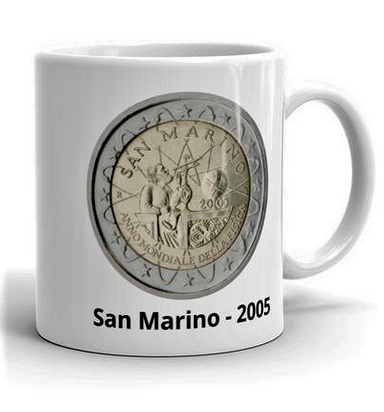