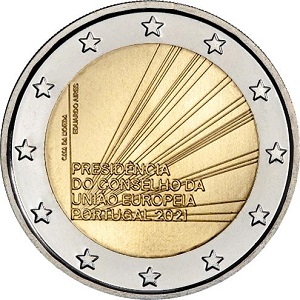 Details relating to the Portuguese Commemorative of 2021.

This coin has been minted to commemorate the fact that for the first half of 2021 Portugal holds the presidency of the EU.

The coin is quite imaginative and shows rays (of light ) emanating from Lisbon which is depicted as being the westernmost capital of the European Union. Each ray emanates at the angle that connects it with another capital in the EU.

Something else, since Brexit there are 27 countries in the EU, so ignoring Portugal that would lead one to expect to see 26 rays. If you count however you will only see 25.The reason is that Prague and Vilnius lie almost on the same line, so they have in fact been dealt with  with one line. Two birds with one stone so to speak.

Also,although the two rays forming a right angle appear to be pointing due North and East, in actual fact for them to lead to the cities they are supposed to point to, the representation should be rotated 9° anti clockwise.

Imposed over the rays and fitting snugly within the vertical and horizontal rays is the inscription “PRESIDÉNCIA DO CONSELHO DA UNIÃO EUROPEIA PORTUGAL 2021” (presidency of the council of the European Union Portugal 2021).

On the left , between nine and ten o'clock, printed vertically in somewhat smaller print are the inscriptions “CASA DA MOEDA” ,the mint mark of the state printing house,“EDUARDO AIRES” , the name of the designer.

All in all a very interesting coin.