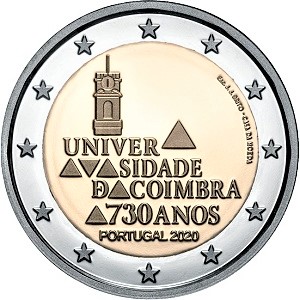 Details relating to the Portuguese Commemorative of 2020.

This coin commemorates the 730th anniversary of thge founding of the University of Coimbra.

The king of Portugal decreed in 1270 that construction of the University should begin and in fact it commenced in that very year - making it the oldest seat of learning in Portugal.

Although originally built in Lisabon it was relocated to Coimbra in 1537.The university was honoured in 2013 by being included in the UNESCO World Heritage Series.

The motif of the coin shows the clock tower of the university in the upper left quadrant of the inner circle.

In the lower half of the inner circle is the inscription “UNIVERSIDADE DE COIMBRA 730 ANOS” (University of Coimbra 730 years). This is divided by a series of triangles. THe DE is shown in ligature ( when two letters are combined in one symbol).

Finally, around the edge of the inner circle, running from one to three o'clock is an inscription with the name of the designer as well as the name of the mint - "Esc.J.J.Brito - CASA Da MOEDA".