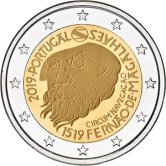 Details relating to the Portuguese Commemorative of 2019.

The coin commemorates the the circumnavigation of the world by Magellan.

This enterprise was commisioned by King Carlos I of Spain in 1519. Although a Spanish undertaking, Magellan was Portuguese

The aim of the expedition was to find a Western route to the spice islands - somewhat to the north of Auistralia.

In accomplishing this task Magellan found a straight towards the bottom of South America, now named after him - "The Magellan Straight".

This was the first circumnavigation of the world and proved that the earth was indeed spherical.

The motif of the coin shows,in the inner circle, a three quarter profile of Magellan, staring out to the left wistfully as if still looking the passage to the pacific.