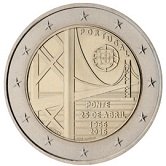 Details relating to the Portuguese Commemorative of 2016.

This coin commemorates the 50th anniversary of the finishing of the first ever bridge connecting both sides of the river Tejo.

The bridge is known as “The 25th April Bridge”. It was originally called “Salazar Bridge” but after the fall of the dictatorship it was renamed. The bridge is in total 3.2 kilometers long with a hanging portion of 2278 meters over the Tejo. The bridge carries both road and rail transport and is of its kind the third longest in the world.

The motif in the inner circle shows the middle portion of the bridge. Under the bridge in the lower right quadrant is the inscription “PONTE 25 DE ABRIL 1966 20162”.

The name of the issuing country is on the edge of the inner circle from twelve to two o’clock. Just under this  is the Portuguese coat of arms.

At the bottom we see the mint mark and the name of the designer (José Aurélo) at seven and six o’clock respectively.