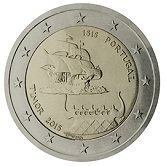 Details relating to the Portuguese Commemorative of 2015.

This coin commemorates the 500th anniversary of the arrival of the Portugese in 1515 in Timor.

On 18th August 1515 the Dominican missionary Tomor set foot in what later became known as East Timor. East Timor gained its independence in 1975.

In the inner circle we see a 16th century ship in full sail. Under the ship the thatched roof top of a local house is depicted. On the roof top we see various wooden sculptures that had a significance regarding legends of the time.

On the edge of the inner circle at four o’clock is the mint mark and at around six o’clock the name of the artist,Fernando Fonseca, appears.