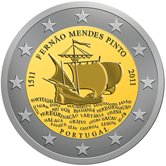 Details relating to the Portuguese Commemorative of 2011.

This coin commemorates the 500th birthday of Fernão Mendes Pinto, a famous Portuguese writer and explorer.

Pinto became famous due to his memoirs – captured in a work called Pilgrimage which was first published 30 years after his death. His work provides insights into life in India, China, Japan and Ethiopia although it is also believed he indulged in exaggeration and so not everything in the work should be seen as an accurate portrayal of conditions. Nevertheless his work is amongst the most wide spread Portuguese books in the world.

The motif for the coin is a sailing ship afloat on an ocean of words – among other the name of his book peregrinação as well as some of places he had visited and described in his work.

Around the top edge of the inner circle is the inscription “1511 FERNÃO MENDESPINTO 2011”. At the bottom is the name of the issuing country “PORTUGAL”.

The mint mark can be seen at eight o’clock and the mark of the designer”1IC-FB” at four o’clock.