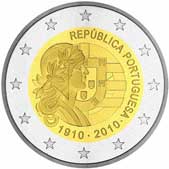 Details relating to the Portuguese Commemorative of 2010.

This coin commemorates the 100th anniversary of the founding of the first Portuguese Republic.

After the murder of a member of parliament on 2rd of October in 1910, there was rioting in the streets of Lisbon and a provisional government established the Portuguese Republic on 10th October 1910.

The mint mark “INCM” is between eight and nine o’clock and the name of the designer “JOSE CÂNDIDO” is between nine and ten o’clock.