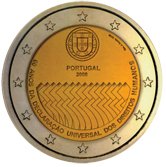 Details relating to the Portuguese Commemorative of 2008.

This coin was issued to commemorate the 60th anniversary of the declaration of human rights.

At the top of the inner circle is coat of arms of Portugal. Thereunder we see PORTUGAL and a line lower the year of issue 2008. In the lower half of the inner circle 30 sheets of paper are depicted – these representing the 30 articles in the declaration of human rights.

Around the edge of the inner circle, running from ten o’clock to two o’clock is the inscription “60 ANOS DA DECLARAÇÃO UNIVERSAL DOS DIREITOS HUMANOS”.(60 Years of the Declaration of Human Rights).

Between one and two o’clock is the name of the artist (J.Durate) and the mint mark INCM.