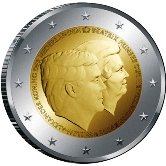 Details relating to the Netherlands Commemorative of 2014.

This coin was issued on the occasion of the official farewell celebrations for the former queen who abdicated in favour of her son Willem Alexander.

The coin is similar to one issued in 2013 on the occasion of the actual abdication.

The motif of the coin is again portraits of the reigning king and the ex-queen, this time looking to the right. In the foreground is King Willem and in the background ex-queen Beatrix.

Around the edge of the inner circle is the following inscription (starting at twelve o’clock):

At the top is a crown and the year is preceded and followed by the mint masters mark and the mint mark respectively.