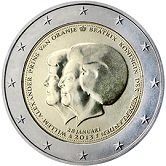 Details relating to the Netherlands Commemorative of 2013.

This coin was issued on the occasion of the abdication of Queen Beatrix.

Shortly before her 75th birthday Queen Beatrix announced in a radio broadcast that she would be abdicating on 30th April 2013 in favour of her son Willem-Alexander (Prince of Orange).

In the inner circle are the portraits of the ex-queen (Beatrix) and the now reigning monarch (Willem-Alexander).

Around the edge of the inner circle is a row of small dots and within that the inscription “BEATRIX KONINGIN DER NEDERLANDEN” from twelve to five o’clock and then from seven to twelve o’clock “WILLEM-ALEXANDER PRINS VAN ORANJE”. At the very top is a crown, at the bottom the year of issue 2013 which is flanked on the left with the mint masters mark and on the right by the mint mark.