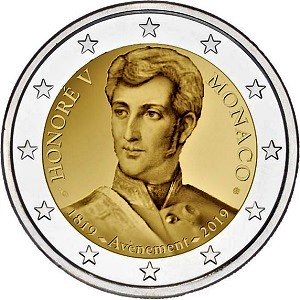 Details relating to the Monaco Commemorative of 2019.

The French Revolution resulted in the Grimaldis losing all their possessions and priviledges in France and Monaco was annexed/absorbed by France.

After the Napoleonic Wars Monaco regained its independence in 1814.

The motif of the coin depicts Honoré Gabriel Grimaldi looking to the left. This is taken from a painting of him from around 1800.

Around the edge of the inner circle we see from eight to eleven o'clock the inscription "HONORÉ V" and from one to four o'clock the name of the issuing countrs "MONACO".

Finally around the bottom (eight to four o'clock) in somewhat smaller print "1819 Avènement 2019" this being the date of accession to the throne, the French word for accession and the year of issue of the coin.