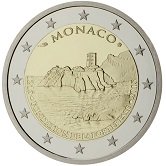 Details relating to the Monaco Commemorative of 2015

The coin honours the building of the first tower on the rock of Monaco.

In 1191 the emperor Henry VI granted Genua control over the costal region of present day Monaco.

In June 1215, where the present palace stands, construction was started on the Genoese border fortifications. This is regarded as the founding of Monaco.

In the inner circle of the coin we see the tower on a rock. At the top is the name of the issuing country MONACO and this is flanked on the left by the mint mark (cornucopia) and on the right by the mark of the engraving department of the French mint.

Around the bottom of the inner circle stands “1215 FONDATIONDE LA FORTRESSE 2015” (Founding  of the fortress).