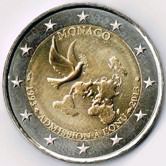 Details relating to the Monaco Commemorative of 2013.

The coin celebrates the 20th anniversary of Monaco’s joining the United Nations.

As one of the main aims of the United Nations is the maintenance of world peace, this is reflected in the coin’s motif.

The country of issue, Monaco, is on the edge of the inner circle between twelve and one o’clock and around the left and bottom edge is the inscription “1993  ADMISSION Á L’ONU 20132”. Just after 1993 and just before 2013 is the sign of the engraving department of the French mint.

Finally at ten o’clock is the mint mark.

The number of coins minted 1,2 million is unusually high for Monaco.