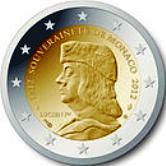 Details relating to the Monaco Commemorative of 2012.

This coin honours the 500th anniversary of the independence of Monaco.

The independence of Monaco was rendered possible by the recognition of its sovereignty by King Louis XII of France.

The motif is a portrait of Lucien I. Lucien, of the family Grimaldi, ruled the city-state from 1505 until his violent death.

Around the edge of the inner circle from eight o’clock to four o’clock is the inscription:

At eight o’clock is the inscription” LUCIEN 1er and immediately thereunder the mint mark. The mark of the mint master is between four and five o’clock.